After weeks sitting on some amazing news, I can now go public: I have been selected by Bristol Old Vic for Open Session Writers 2018. My first full length play ‘Parzival’ will get a year’s worth of development support and workshopping and (potentially) a production in Spring 2019.

Parzival has been a long time in the making. Originally titled ‘Nothing’, I wanted to write about someone who (in a world filled with Conspiracy Theorists shouting about increasingly fantastic Conspiracy Theories) had a genuine Secret, about which they chose to say… Nothing. Why would they remain silent about it and how would they react to the threat of an outsider?

In Parzival, Alison’s remote farm is invaded by Conspiracy Theorist Dan, determined to find proof to support his bizarre theory. His arrival forces Alison to finally reveal the farm’s true secret to her daughter Emma, who must decide between the rival narratives and (potentially) use the situation to enable her escape to the city.

I have already had one workshopping session at Bristol Old Vic Theatre School which was great fun, generated many useful ideas and gave me a chance to get excited by the whole project all over again – the script was originally submitted back in June 2018.

I now have to complete a new draft by January. Plenty time…

One thought on “Parzival… at Bristol Old Vic” 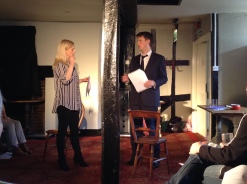