My first piece written for the Dialect/Lake 32 Writers Residency has now been recorded and published online, a radio play entitled Something Purple.

My original ideas for my residency were all set in and around the water park. I planned to use actors as well as the people who work and play in Lake 32, with the natural ambient sounds of the lake and surroundings as a backdrop.

And then lockdown happened. At a stroke, all my plans had to be cancelled/postponed and I had to return to the drawing board. Which in hindsight proved to be a good thing. The trouble with first ideas as that they can often be very obvious, the things that might have occurred to everybody else. Now, as I couldn’t (technically) ask actors to go to the lake because of Lockdown, I decided to make Lockdown the centre of the story: to have two characters – Carl and his Dad – desperate to get to the lake but stuck indoors, talking over Zoom. Dad, divorced from Carl’s mum, keen to cheer his son up. The inspiration also came partly from watching Michael Sheen and David Tennant in ‘Staged’.

I had been speaking to Cirencester Theatre Company about recording another of my scripts and they were the first people I spoke to about recording Something Purple. We recorded the play on Sunday 31st January 2021. There were issues with microphone noise, but as the point was to portray an authentic Zoom call, we worked around them where possible.

One of the most revealing things about recording your own audio pieces, is that it’s the best way to learn where you over-write. After editing the script several times, it was only when editing the final recording that I really grasped how many lines didn’t actually need to be there.

Many thanks to the Cirencester Theatre Company, Adrian McPherson and Michael Iredale for acting in it and Caroline Jalilli for recording & editing it. 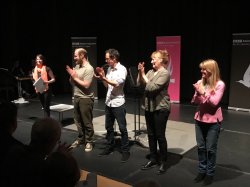 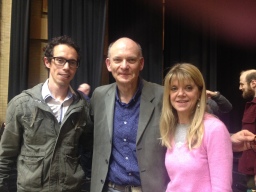